From a young age, I've always liked the water. And off and on, I've gone to one of the indoor pools in my little town to swim laps. One reason I like it so much is because you're weightless in the water, and there's no pressure on any joints. While I may feel (and look) like a bag of bricks when I get out, I feel like a mermaid in the water.

A couple of months ago, I was talking to my doctor on the phone about generally not feeling great, and he said--knowing I'm a swimmer, "why don't you go swimming?"

"But all the pools are closed," I whined.

"There are other bodies of water for swimming," he said.

And that's how this started. I live very close to the ocean, not the open ocean, like on the Tofino side of Vancouver Island, but the ocean between Vancouver Island and mainland British Columbia, called the Georgia Strait.

At first I considered rivers. There are lots of rivers. I asked a couple of locals if you can swim in rivers, and they recommended a few spots. "But there are currents," they warned me. "And it's cold. Mostly glacier run-off."

Ugh. I thought. For those not familiar with this area, we do have some mountains and skiing in the winter.

Then I considered lakes. There are some nice big lakes here, too. "Those are even colder," I was told. "Glacier run-off." Terrific.

So, now I was back to the ocean. It's also my closest solution, about a 3-minute drive from my house. The open ocean has very little temperature change throughout the year because it's so vast. However, the Georgia Strait does have a significant temperature fluctuation throughout the year because it's narrow and has plenty of rivers and estuaries emptying into it. It's also hard to get an exact temperature unless you happen to have a highly accurate water thermometer, which I don't. I rely, instead, on the estimate from the NOAA via satellite of the water temperature near Nanaimo, close enough, which was, today, 15.9 degrees Celsius. Or pretty damn cold.

Cold enough that it's just on the edge of painful when you get in, which may in part contribute to why it feels so good after you get past the initial shock response, which takes about a minute and a half or two minutes. In theory, aside from cortisol, your body releases plenty of endorphins, and you feel almost euphoric after a cold swim.

According to research, and I'll list several citations at the end, your cortisol response lessens over time if you go regularly. Research on cold water swimming and cold water immersion is in its infancy, but one theory is that as your body gets used to the stress of the cold water, your body gets better at dealing with other lesser types of stress.

By the way, technically, cold-water swimming is defined as swimming in water 14 degrees Celsius or lower. In my opinion, 15.9 degrees is close enough.

In addition, cold-water swimming and immersion is known to help athletes after a major work-out, helping their muscles recover faster with lower rate of injury. There are some theories that cold-water swimming and immersion may also play a role in the following: lowering inflammation, improving how our bodies use insulin, decreasing pain, increasing metabolism because of both the time it takes to warm up and also activating the "brown" fat we have inside us, and lessening depression and anxiety. There is a lot of anecdotal evidence that people generally feel better when they go regularly. But anecdotal evidence is not the same as double-blind, peer-reviewed studies. I get that.

I also know that some people drop dead while doing it. Often those people have underlying health conditions that were unknown at the time or that they ignored. People also drop dead in restaurants and in bed. The most dangerous part is the first few minutes when you're having that shock reflex. I also read in a book by Dr. Michael Greger that swimmers tend to put on weight rather than lose weight because they are hungrier and quickly make up for any calorie deficits. That has not been my experience. I'm not hungrier, and I'm not putting on weight. Quite the opposite. But let me be perfectly clear. I'm not doing this to lose weight or get fit. If those things happen, that's fine with me. However, I do it because it just plain feels good. Anything else is gravy.

As I said earlier, this research is in its infancy. I'll tell you what I notice.

I like it. I miss it if I don't go, and I generally feel better. I sleep better and my mood is better. I also secretly enjoy when people on the beach stare at you dumbfounded and can't believe you're in that icy cold water. That tickles me every day. And if anything hurts, like my ankle or my back, I feel like I've climbed inside a giant ice bag and get immediate and long-lasting relief. I take less Advil for pain. If you can grit your teeth long enough to get in, you get over the shock in about two minutes. So, I'm not seeing a lot of downsides to this activity. Well, other than I'm feeling an irresistible impulse to buy some more bathing suits and some giant bath sheets.

Someone else pointed out to me that swimming in open water is very different than swimming in a lane in public pool. I don't have to take a shower before going in. I don't have to dodge other swimmers because there are none. I don't have to go in one direction and stay in my lane. I can do whatever I want, and the whole ocean belongs to me. It's much easier to get into a meditative state and pretend you're somewhere else for a few minutes, something that's near impossible in a public pool.

It takes a long time to warm up, and it's not recommended to take a hot shower right away because your blood vessels are constricted, and you don't want them to all open up suddenly and to faint. Because of this I try to go early in the day. I also find it easier psychologically to go earlier in the day and get it done. Get it over with.

There are a few things I try to do to be as safe as possible.

1. I try not to swim alone. Sometimes I go alone, but I always try to get one of three or four people I know who do this activity to go with me. Swimming alone is never a great idea, and I trained as a lifeguard 400 years ago. However, if my choice is go alone or don't go at all, then I go anyway.

2. I tell my husband where I'll be and when I should be back.

3. I recently bought a little buoy that I tether to my leg to make it easier to find me in case of emergency. I'm easy to spot in the water. A buoy is required with many of the open water swimming clubs worldwide

4. I only swim when the tide is coming in, usually from about 4 hours before high tide to high tide. I do this because I think it's smarter to have the water pushing you to shore rather than trying to drag you away from shore.

5. I only swim close to high tide because I can swim much closer to shore when it gets deep fast. At low tide you have to go way out, to be in water deep enough to swim in.

6. I'm careful getting in. If you get in slowly, you gradually get past the shock reflex without inhaling any water and panicking.

The water temperature is going to continue to fall through January. Eventually I may need a wetsuit, and I'm not averse to getting one if I feel like I really need it. But if you go every day, like I do, you don't notice the falling water temperature because it's so gradual. The low will be about 7 degrees Celsius. For right now, I've ordered a neoprene hood and neoprene socks that divers use. The extremities feel it the most. I'll swim with those for a while, and then see if I need more.

So, this is what I'm doing these days. I told my doctor the other day that I felt great. 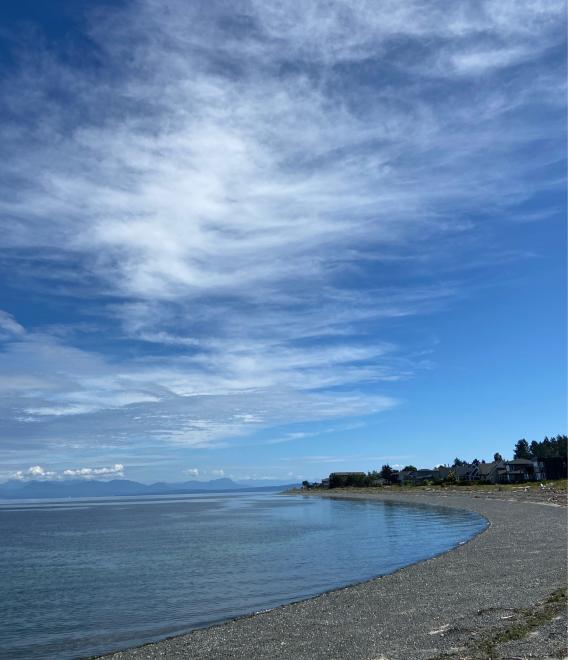 Very inspiring! Those personal buoys are great; Lauren got one (& loves her wetsuit). Thanks for sharing.

Cynth! I would be right in there with you... I am 1,000 feet from the ocean! Right now our water temperature is abt 70 degrees but I jump in every day! The salt water feels marvelous! Thanks for sharing!

Very inspiring but I’m a land lover. Keep it up Cynthia.

Kudos to your doctor for putting you onto swimming - if it weren't for Covid, might not have happened. Great information. It makes me long for some cold water to swim in. Might have to settle for walking and cool baths. ;o)

WOW - You are doing AWESOME job, don't stop, I wish i have time to do what you do. xox